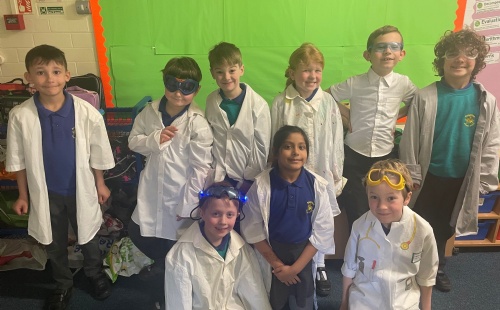 Our first experiment was Newton’s Disc, also known as the disappearing colour disc. It is a rotating dics with segments in different colours appearing as white when it spins very fast. The children found this very interesting and it linked to our most recent science topic.

Next, we made lava lamps using oil, water, food colouring and Alka Seltzer tablets. For this the children wore their white shirts and we even had some science googles, this made the children feel like true scientists and they had great fun doing this experiment.

Finally, the children spent some time researching a scientist called Alhazen (Ibn al-Haytham). He is a famous scientist born in 965 AD and was well known for being a mathematician, astronomer and physicist. He was referred to as the ‘father of optics’. The children then spent their time creating a double page spread all about him.

See the link below for our picture gallery this week.